A Sacred Site: The Buffalo Ribstones by Viking 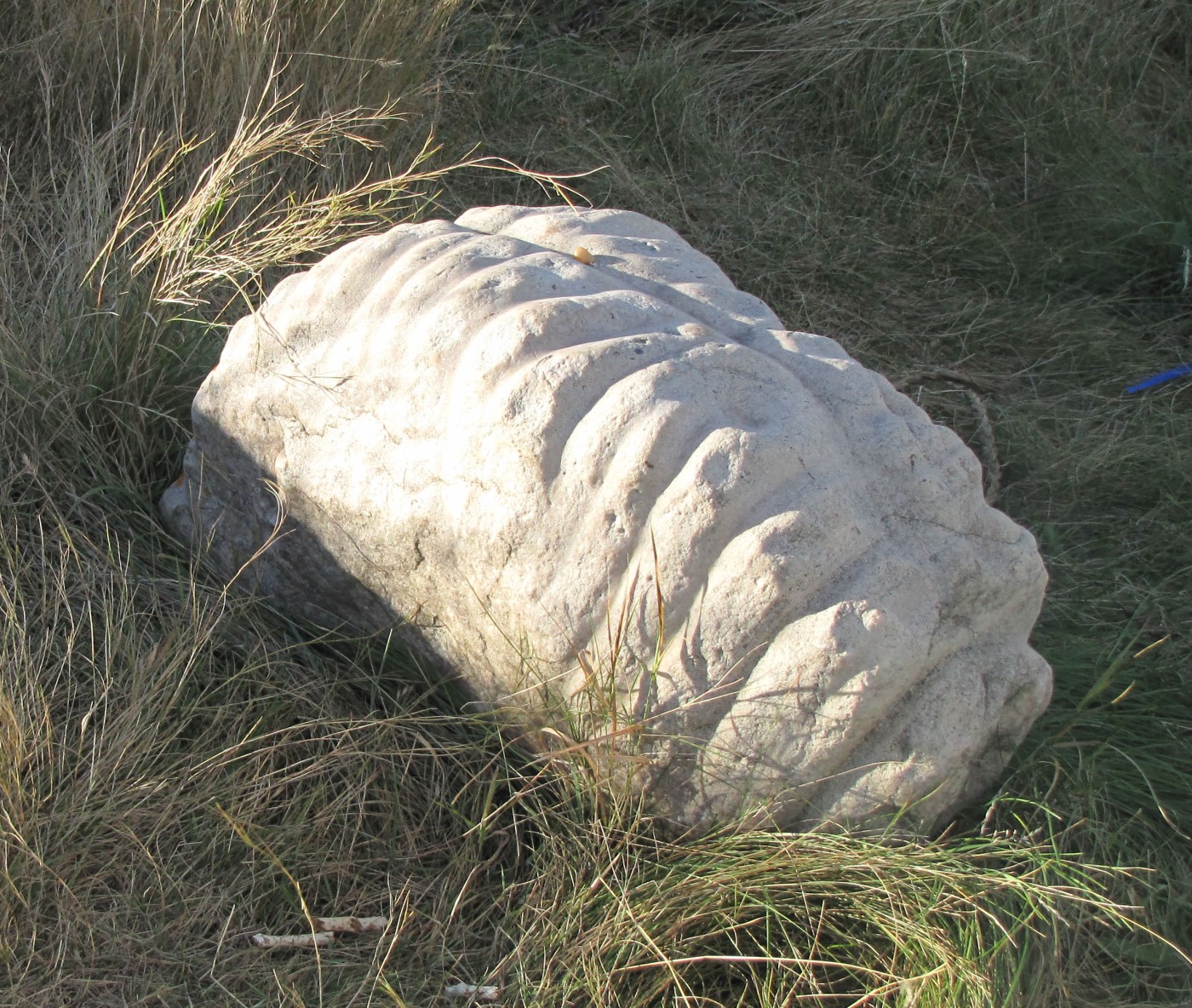 Located on the highest hilltop between Viking and Kinsella, just south of Highway 14, are two carved stones known as the Viking Ribstones.  I have wanted to visit the site for many years but it wasn’t until this fall that I had the opportunity to do so.

Of the nine buffalo ribstones (Assinikospikeganit in Cree) that have been found in Alberta, the two near Viking are the only ones that remain in their original location. The grooves carved into the stones were shaped to resemble the backbone and ribs of a buffalo. The boulders are quartzite, deposited on the hilltop many millennia ago by the glaciers which once covered the land. A popular choice for such carvings, they were likely chosen because they are an unusual type of rock to find in the area.

Many centuries ago (perhaps even millennia – no one knows for sure how long ago the carvings were done), someone with a lot more patience than I, would have spent countless hours working with stone and bone tools carving these important images. A long groove runs down the back of each stone like the backbone of a buffalo. Numerous shorter groove branch off it to either side like ribs.  The ribcage is more distinct on the smaller of the two stones; the larger stone seems to be lying on its side.

There are also several round holes on each stone. Some people have suggested that these holes represent wounds and were carved to allow bullets or arrows to pass through the stones without harming the spirit animal within. Another theory is that the holes are the result of repeated pounding done to replicate the sound of a running herd as part of a pre-hunt ceremony. A third explanation that has been put forward is that the holes on these and other ribstones were made to resemble the rock-mocked surface of the Iron Creek Meteorite or Manitou Stone. Said by some to be the original ribstone, this meteorite – the largest ever found in Canada – fell to the earth only 40 km southeast of the Viking site and remained there until 1866.

Strawstack Hill where the Iron Creek Meteorite once rested can be seen from the site of the Viking ribstones. Indeed, this hilltop provides an incredible view of the surrounding area and would have made a great place to scout out the movements of buffalo herds. This is probably why this location was chosen for these sacred stones. A sad story in the Cree community tells of how after the buffalo herds had been all but wiped out, a group of Cree gathered on the site to try and find some buffalo to feed their people. Unable to see any, they died from hunger and disease.

That this hilltop has long been important to the Cree as evidenced by the many historic artefacts that have been uncovered here. Hunters came here to make offerings to Old Man Buffalo, protector of these all-important animals, to give them luck before setting out on a hunt. Afterwards, they returned to give thanks for a successful hunt.

This is still a sacred site of the Cree people and should be approached with respect. By the ribstones, there are braids of sweetgrass; these are ritually burnt before making an offering or saying a prayer to purify oneself. Offerings of tobacco can be seen throughout the small enclosed area. Colourful strips of cloth are tied to a nearby bush as well as to the rope fencing off the site. These are Native prayer cloths (Wapinasin in Cree) left as offerings to the ancestors.

This is a text widget. The Text Widget allows you to add text or HTML to your sidebar. You can use a text widget to display text, links, images, HTML, or a combination of these. Edit them in the Widget section of the Customizer.